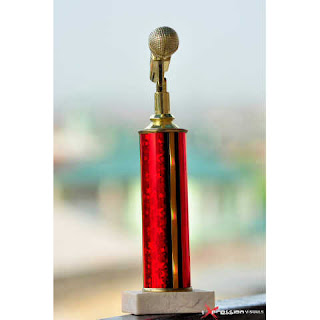 We told you yesterday that we will keep you posted “as e dey happen” here is the response from THE MIC TEAM.

Re: Stylee Broda (Omo Osun No 1). Bravo! Thank you for the propagation of THE MIC 2015 news. Maybe I should begin with this your low school grade shortened your memory and your incapability to perform your “awa l’omo Osun” songs beyond Asejire dam made you think awards are meant for beginners.

Awards are what quantities hardwork, labour, relevance, Popularity and so on in that likes and not a talent hunt. I know your myopic and your intelligent quotient is ill.

This was manifested when you think you are a senior artiste in Osun state during d coalition of Osun Hip Hop group that was holding at Baba Elebuibon Hall/Studio.

You were at the first edition of this same award you intend to run down. You were also given the privilege to perform at the industry night the 3rd edition.

You also won the best group artiste of the year in ’14 of this same award. I knw u must have forgotten cos you are a nix.  why didn’t you return the award trophy that ur representative or ur friend received on ur behalf? Dump skulls.

What u should have done is to have  sent a message to the organiser directly and show ur non-interest to be seen on dis award event(site and Stage)simple. There are several awards in which u could be honoured for your stagnate position instead of running THE MIC Awards down.

You then sat down, took cheap drugs and you have the guts to write THE MIC Team. How many entertainment event from private body in Osun has kept osun on d national and international Map? DJ Walkit, the Best DJ Category winner in 2012, who has left Osun since then got back to us via this year’s publicity. An Ijebu-Jesa born Artiste who is based in North America fell back to track via this years edition wishing to support some winners. You then open your gutter mouth to say we are not helping young Talents.

As per the Project Director of this Award, we are very sure you were not born in 1984 wen he was in Pry 3 at The Apostolic Primary sch, Igbaye Ilesa.(Just to let u knw he didn’t meet you in Osun and vice versa).

We are also sure you do not have a computer system in 2009 wen Adebowale Adedoyin a.k.a DJ Rap, an associate of the THE MIC Project in whom we are well pleased, had a digital studio at Okefia which Producer King Solomon managed. Where were you self when CY – hit song shook Yokohama  was rocking the air waves in south west? Y not just keep up with your low life and stop claiming you are fighting for some talented up coming artistes.

We want to ask you guys, how many shows have you put up to help these people you are fighting for? What role did you play in Osun Talent Plus or would you have done better than DJ Sony who put the show up with his personal fund? How many of these upcoming have you done songs for? Cos we heard you have a 8X8 ft room studio somewhere in a rustic part of Osogbo.

You are just a negative minded individuals who needs deliverance at the Osun Osogbo Festival next year. One of the great investors and mover of showbiz in thhe state- Bright World Entertainment, put down his money, time and other resources to do a monumental song + Video on behalf of Osun Entertainers, Freestyle K produced the beat, King solomon did his best on the song, but you layed your voice during the recording and  couldn’t show up for the video. Maybe you don’t have good cloths to wear for the shooting-stinking asshole.

A foremost DJ Rap entreated your support for his show last year you didn’t show love to him ‘cos he dint pay you. Who would have paid you armatures to come and perform Omo Osun ni wa… Wen you can not even hold Microphones properly as professionals on stage and you claim you watch Award events on TV.

How much do you think you worth self? You talk ‘Osun’ all the time, Is Osogbo the only town in Osun? Ilesa, Ikirun , Ife, gbongan nko?how much do u even know osun self? you guys aree just cheap Monks.

We remember when you were begging Hon Ladi Soyede(Fmr S.A to Aregbesola) at technical college football pitch in 2012 to perform alongside ‘Lujesha at d evening Jazz show during Osun Osogbo Festival.

We know you as one of the Osun artistes and we like you because you are morons. What a boy of age 22 would have been doing is what you both of older age are doing (2 heads are worse than 1). At least If one is not sensible then other shouldn’t be daft naa.

He has worked with Zmirage, Samolad Music House both in Lagos. What have you guy done? na to dey scatter Scatter tins una sabi. Who sabi una self? Who has ever paid you for a show? Show us a receipt or teller of 50,000 payment to you guys for a show. What are we  even saying… Show us 20k teller!. What Video do you have? What platform have u climbed?We have supported our broda Jones. Jonzin to clime stages like Annual MARE festival in Ondo state, Star Treck, MTN FujiFest, Lagos Beat and many more and you sit in one corner of Ayetoro in Osogbo when you are not known in Okuku, 35 min drive away from where you sit. Don’t cross your path towards us.

We are progressives, we are positive and we are getting better. Shame on you if you don’t  BC this reply so that your people will know that you have engaged in a pen war. You saw 3 blogs last night abi, we will double it daily so that u can get popular well well.

Yours Sincerely
Team THE MIC.