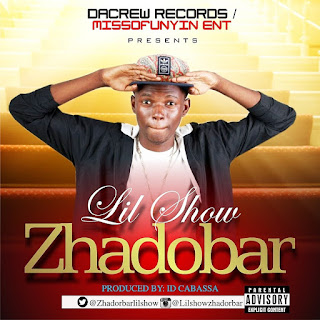 DaCrew Records / Missofunyin Entertainment Present The New Act Under The Record Label (Lil Show) A.K.A (Zhadobar), Idris Okikiola was born in Ogun State in early 90’s and based in Abeokuta, Ogun State. This is the first song under the record label, titled: ZHADOBAR, named after his Nickname and was produced by ID Cabassa. Official Video was released on 24th Of July, 2016 which was directed by BIGGCASS & Ace DJ Hacker Jp.