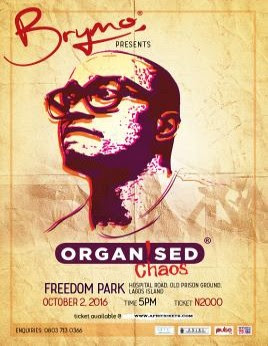 Tagged ‘Organised Chaos’, the music concert is Brymo’s first major own concert and is scheduled to take place on Sunday, October 2, 2016, at the prestigious Freedom Park, Lagos.

The concert will be headlined by Brymo alongside his band, ‘The Lagos Touts’ with an array of great Nigerian performers also on the radar.

The night promises to be one of an unforgettable experience with lots of music and artistry on offer. The event will showcase Brymo in a form the audience has never witnessed before.

Brymo, fresh from the release of his much talked about chart topping album, “Kl?tôr?s” disclosed that no stone will be left unturned to ensure music lovers and other attendees are given optimum satisfaction on the night.

Early birds tickets for the event is selling now for N2000 flat.
Get tickets here: http://www.afritickets.com/event/brymo-organised-chaos-concert

Share
Previous ARTICLE: MY HUSBAND – FROM A DRUNK TO A LOVING HUSBAND
Next AUDIO & VIDEO: TINANA – Kcee (Prod By Del’B) | @iam_kcee