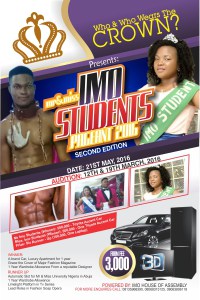 Ahead of the second edition of Mr and Miss Imo Students beauty peagent 2016, boldly presented by Eminent House Entertainment,The creative manager alongside the event manager together with Mr Dim Kelvin sitting on behalf of Eminent House Entertainment, held an interaction with the press men at Lamonde guest house Owerri, The Creative manager
Comr. Amb. Nwama Stanley Smith says that the theme of this years second edition is BEAUTY MEETS TALENT, is going to be a memorable thing between the contestants and the audience. Comr.Amb.Nwama Stanley Smith the brand owner now said that this edition is solely targeted in bringing out the talents in Imo Students now promising to enroll the models on skills acquisition and how to become a super model,he also said that his excellency the executive governor of Imo State have given Imo Students free education,that is now time they put education and beauty together to bring out the talents in them.

Still on the remark the event manager of this program Mr. Williams Opara noted that the 2016 edition of Mr. and Miss. Imo Students pageant is going to be the biggest show to watch in the state come May 2016 as lots of popular Nigerian artistes have been billed to thrill audience during the show.

He urged Imolites as well as corporate agencies to be part of the history by sponsoring the event as part of their corporate social responsibility. MR AND MISS IMO STUDENTS 2016  SECOND EDITION What are you still waiting for? Don’t let this golden and rare opportunity pass you by…

Your dream of becoming a brand ambassador is just by your side… Why not stretch that hand and grab this opportunity… It is the MR AND MISS IMO STUDENTS 2016 BEAUTY PAGEANT. A pageant with class aimed at celebrating beauty, skills and empowerment of imo gentlemen and Ladies. Just a token of N3000 and you will be on your way to becoming a proud owner of  a Toyota Camry car N200,000 Brand ambassador for house of freeda. You can’t beat that… NOTE: Contestants will also be trained in these skills:

Cosmetology Beauty Care and Salon Culture and Tourism Fashion and a movie premier. Auditions will take place on the 12th of March, 2016!!! Keep a Date!

Relax and Rejoice 2 (The Love Edition)