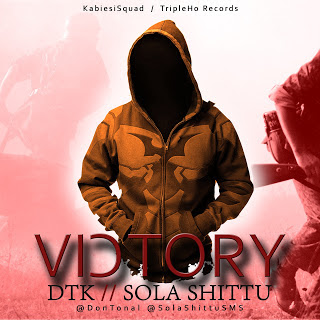 After the successful release of “PrayerForNaija’ and ‘Naso E Go Be’ Don Tonal aka DTK (His Creative Majesty) is here with another creative sound titled ‘Victory’ while we anticipate ‘Largess Ft. LC Beatz’ and the remake of ‘PrayerForNaija Ft. Kenny Kore’
In this track he featured Sola Shittu (SMS) and the vision of ‘Victory’ is about getting the mind of God across to listeners. Don Tonal stated “I did Victory from my soul; it’s a sound from my inner bone”.
I believe in singing inspirational songs that have reality in it. I choose to sing reggae genre because it always feels very deep to both the Artist and listeners”. He said, “Music has been part of me from the day I discovered I’m human”.
The release of this song is to compliment his birthday which is today 21st July. Don Tonal is grateful to all who suggested one thing or the other to the successful completion of the song from the making phase. He mentioned a few names; Yetunde Joyce (mama YJ) has been awesome, Sweet Steve, Oba-Dominion Ademola Adefemi (who always stayed with me throughout the night and day sessions), Tmoore and others that I could not remember at the time of this press release.
Don Tonal also plan on making another version of this song very soon and the track will be called #VictoryForAll which will features tons of Ministers and Artistes.