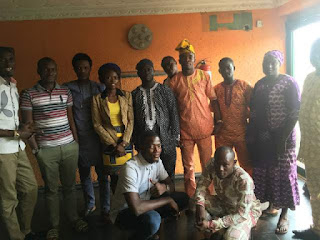 Yoruba Youth set for the Summit

When briefing the press after the indoor meeting with the Planning committee, the General Secretary, Com Wahab Babatunde made it known that the reason for the meeting was to know what is on ground and what are the necessary steps they have to take for the Summit to be successful.

In his own contribution, the Chairman of the Planning committee, Mr Akinola Oluwatayo stated that Oyo state capital is very much ready to host this historic event, and that everything is set, except for the financial aspect of it, because all what they have been receiving so far is promises, but they are very optimistic that all will be well before the turning of the month.

In the meeting attended by delegates from Osun, Oyo, Ogun, Kwara, Kogi, Edo, Ekiti, Ondo and Lagos state, the National coordinator, Com Ishola Lukman Olatunji however affirm that the world should watch out for the Summit, as it will focus on promotion of Yoruba rich-culture and traditional values as well as Uniting the entire Yoruba sons and daughters. He therefore urge the good people of Yoruba Land to encourage them on their pursuit for betterment of Yoruba Land.

The Yoruba Youth Summit 2016 is a day event with two sessions. The morning for the plenary session and discussion, while Beauty Pageant/Fashion show/Award/Asa Night follows in the evening.