State Of The Nigerian Music Industry: No Talent Required | By: Jidé Taiwo @thejidetaiwo 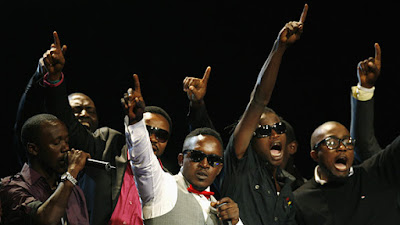 Them boys dey lose they minds, music is getting empty; they don’t mean nothing and really they talking plenty- Iceprince; Overkilling Remix by Djinee

A strange thing happened last year at the second edition of the now annual Nigerian Entertainment Conference Live: Davido and his producer, Shizzi demonstrated how easy it was to produce a “hit” track. In about fifteen minutes or less, they had hummed and ahhed their way into a sound no different from any of Davido’s several hits.

To be fair on the pair of them, what they did is what every other performer out there does: arrange a catchy beat, lace some dodgy lyrics with a generous dash of autotune and voila, a hit is made. However what made this demonstration strange was the audience- made up of entertainment insiders (producers, journalists, record execs etc) applauded and stood in ovation as though they had just witnessed a euphoric magic trick by another David- Copperfield.

It is pretty much obvious to anyone who is not musically oblivious that the standards of the music industry and the artistes involved have significantly dropped during the past decade. The popular music currently streaming across the airwaves simply lacks quality and any form of talent on the side of the artiste. Aside from producers and a select few musicians, popular Nigerian music (which till today still has no definition or genre) is nothing more than run-of-the-mill sounds. It offers no lyrical depth; no tasking composition and any random performer can be referred to as “talented”.

It is undeniable, for the most part that the music is catchy, but the credit is not placed in the right hands. Instead of the artistes (and I use that term loosely because the word “artiste” in this context is an anomaly: what they do cannot be described as any type of art) getting all the credit, it should be the producers. Producers are the masterminds behind the writing, mixing and mastering of these tracks, not the artistes. Of course, there are many exceptions to this, but for the most part, the artiste is nothing more than the talking head and the personality presenting the music, which is why they should be called performing artistes and not musicians.

Worse still, majority of our most popular artistes simply cannot sing, or rap as the case might be. There’s a reason that most live performances are out rightly crappy, the performers almost always struggle to reach the sound so perfectly honed in the studio. It makes listeners wonder if it wasn’t the same person that made the CD version of the cacophony they’re suffering live.

By implication, any producer or label can pick ANY boy from the streets of Bariga and make him record Skiborobo Skibooo I’m not alright oshey. Doing that requires barely any talent or brain tasking research.

Back to back, every fucking single was a hit- Olamide

The issue of Olamide’s grouse with the Headies Awards has been talked about to no end and it is starting to bore this writer. However it is instructive to note what his point was: every song that his protégé had released was actually a hit. That exactly is the crux of the matter: for whatever reason that cannot be more than the rush to make music that caters to the present wave of absurd gyrations and monotonous gibberish, an average Nigerian artiste will rather take the easy out and produce popular nonsense. After all, that’s what everybody is doing, isn’t it?

Talent means that you possess an attribute that stands you out. When you do not have that talent, you overcompensate by flooding the airwaves with single after single. The idea is pretty basic: beat the audience over the head till they get it: E fe jo ku. That’s why no Nigerian artiste can afford to take a sabbatical from music. They’re all cut from the same unimaginative cloth and the result is the ton of music that is, with apologies to MI, fast food, disposable music.

Nigerian music is in dire danger of becoming irrelevant as its practitioners. Five years ago Dbanj had a godlike status that made him think he could actually be Africa’s Michael Jackson. Today, the ridicule that his “artistic” struggle attracts is painful to watch. His diehard fans will let you know though, that “Baba is still making money o!” Whether he or any other artiste makes as much money as their PR handlers would make the audience believe is a matter for another day. That is not why we are here.

For some of us, it is about the music and it is intensely scary that even the few truly talented musicians are not immune from the petty nonsense that is the rage now: Jantamata is a weak, opportunistic material that Don Jazzy, with more than a decade long status as near genius, should have outgrown. Chidinma should not be singing “My money be like lorry”. Iyanya should not be doing some damage control by insisting he meant “birth room” when he actually sang “From the bed to the bedroom”. (What the heck is birth room anyway?). Even MI made a hook that said “My shepe bottle standing on the wall…If I drink shepe and I accidentally fall…

For as long as this trend goes on, the assembly plant will always churn out dozens of disposable music that fades as soon as the next fad comes along. It’s perfectly okay to make flimsy music but as we can see from Asa who is Nigeria’s biggest international act, you can also choose to put hard work and meaning into your craft and still be relevant.

It is commonly said that talent is not enough. It never is. But it should be at least present in some measure, no matter how minute. Sadly enough, like Nigerian’s oil earnings, true musical talent is in very short supply.

Jidé Taiwo is a Lagos based writer and creative. He’s on Twitter- @thejidetaiwo

Glorious House Music female act @Ngozigospelband, following the release of  her recent video I NEED YOU  …